On November 12th, Inholland, Alkmaar hosted TechValley’s first annual event, and JASA was present! TechValley is a collaboration of thirty-five Dutch machine manufacturing companies who decided to join forces. Together they form the TechnoSpitsen (Techno Strikers) network, and JASA is part of the team. 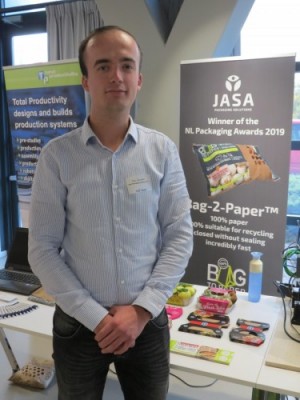 The TechnoSpitsen network aims to smartly connect (new) technologies, people, knowledge, companies, and educational institutions together to assure an innovative and future-proof manufacturing industry. The event drew together some sixty entrepreneurs, students, and politicians, to learn from each other to network and to inspire others. For inspiration, the participants were invited to take a gander at the various innovation projects, like data-analysis and robotic-techniques. For instance, data-analyses of blood cells to recognize sickle cell anemia, and vision-techniques that enables fast and accurately pitting of a mango. The future is here!

During the event, ten companies were introduced to the public; three of them were put in the limelight with an interview on stage. JASA was proud to be one of those three! On top of that, Eduard, Rob, and Thijs were interviewed by Gerhard Knol; they talked about the company, the developments in the market, and the future. Another topic they touched; the reduction of plastic as a packaging material and the reduction of food waste during the packaging process. Eduard also addressed the completely new Vertical Shape Fill and Seal machines that JASA develops.

During the event, it became clear that small and medium-sized enterprises in North-Holland know very well what it means to innovate. JASA is committed to innovation, and with this group, we felt like a fish in the sea. We were inspired by technicians and entrepreneurs who told us passionately about the projects they were running. Eduard also took the floor and, among other things, talked about improving efficiency and increasing the production of the packaging process through standardization. The audience showed a keen interest!

JASA looks back on this event with great pleasure, and with TechnoSpitsen, we continue to strive to achieve a smart manufacturing industry together.

The first one to know about our latest innovations? Sign up for our newsletter!